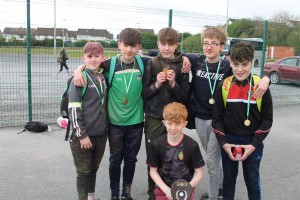 Archery-tag, Foot-Darts and a super colour run were just some of the many activities enjoyed by young people who took part in Limerick Youth Service’s (LYS) Youth Work Games held at Garryowen FC, Dooradoyle recently.

For this year’s Youth Work Games, LYS teamed up with Get Wet and the result was day of high octane action, fun and young people reaching new heights- literally by scaling the largest climbing wall in Ireland! 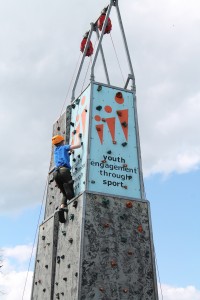 ‘The variety of activities allowed the individual talents of each young person to flourish with the fact they had to work together building team spirit,’ said Paul, youth worker, East Limerick.

After an afternoon of intense competition across many disciplines it was Askeaton-Ballysteen Youth Club that were crowned champions, taking the coveted gold medal to West Limerick.

Away from the competition teenagers were treated to live performance from Music Generation, while also enjoying games and music with the team at Lava Javas Youth Café.

As a final treat young people, volunteers and LYS staff took part in a Colour Run that proved very popular.

Tommy Kerrigan (16yrs), a member of LYS’ Steps Youth Café was one of the many young people who took part in the Youth Work Games and he really enjoyed it.

‘We took part in events such as Frisbee and giant skis, but the one that sticks out most was the colour run,’ laughed Tommy adding ‘we just ran around the football field while the leaders threw coloured chalk on you. It was great fun! 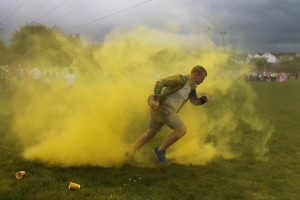 ‘It (Youth Work Games) was a great way to socialize, make new friends, have fun and after all, that is what it is all about,’ said Tommy.

LYS wishes to thank Garryowen FC for the use of their grounds, Music Generation for the live music, PELT Ultimate Frisbee team and all at Get West for their support and guidance.

LYS has a special word of thanks for the young people, volunteers and staff for their support in making Youth Games 2018 one that will live long in the memory.

A member of Youth Work Ireland, LYS remains committed to connecting with and supporting young people to reach their full potential.