There was success for Limerick Youth Service (LYS) at the recent Limerick Garda Youth Awards with Lava Javas Youth Committee and volunteer Emily O’Shaughnessy honoured for their contribution to their peers and local community.

A Decade of Service 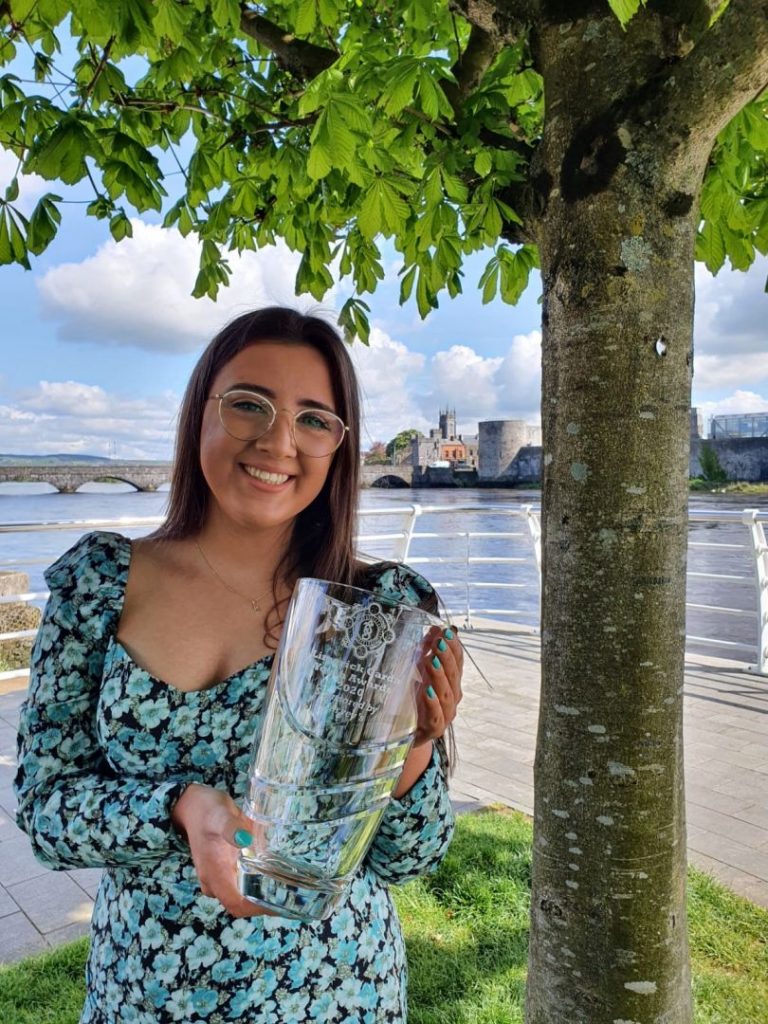 Emily O’Shaughnessy, who has been with involved with LYS in one guise or another for almost ten years, was presented with a Garda Youth Award for her contribution to young people and her outstanding charity work.

A native of Janesboro, Emily, started her journey with LYS as a member of the Queen of Peace Youth Club before graduating to a junior leadership role and a volunteer.

‘In recent years Emily has been a judge in our Youth Factor variety show and is a great role model and source of inspiration for young people,’ said Mary.

Emily’s charitable work was also recognised by the judging panel.  Following the death of her late father Damien in 2018, the inspirational women raised over €12,000 for the Clares Wish Foundation, an organisation that grants wished to adults with a terminal illness.

Emily is currently balancing her volunteer work with her studies at Mary Immaculate College and ‘credits LYS for starting me on the road to becoming a teacher.’

‘I am extremely grateful for this award….it is amazing to see that my work has made a difference to young people,’ said Emily who plans on studying for a Masters in Special Education once she has completed her BA in Education, Gaelige & Business Studies.

A Voice for Young People

The commitment of the Youth Committee members of Lava Javas Youth Café to making it (Lava Javas) a welcoming space and, for been a source of support and inspiration for their peers during the Covid-19 pandemic, was acknowledged as they were presented with a Garda Youth Award.

The Youth Committee of Courtney Brown, Juno Cleary, Lawrence Esan, Trevor McCormack, Zoë O’Farrell, Jamie Robinson, Jade Ryan, Jack Sleath and Chris Walsh, have been a great source of support for their peers, particularly during the past year.

‘The Youth Committee are the engagement point that helps steer the delivering of youth work in Lava Javas,’ said Shelly Goggin, LYS.

‘They show so much spirit when it comes to youth voice and it is amazing to see that they are being recognised for all their hard work,’ said Shelly proudly adding ‘I believe they have helped so many young people to cope throughout this pandemic.’

Prior to the Covid-19 lockdown, the Youth Committee met weekly to discuss topics of interest to the members of Lava Javas and actively planned events and raised issues of concern.

As Ireland went online in March 2020, the Lava Javas Youth Committee adapted to the challenge and continued to support their peers as they developed fun ways to keep in touch with each other.

The intrepid group of young people organised events such as the Irish Youth Music Awards and the Pride Youth Festival, in addition to hosting weekly virtual quizes and more.

Lawrence Esan, Chairperson of Lava Javas Youth Committee, was thrilled with the recognition saying ‘words cannot describe how I feel about winning a Garda Youth Award.  The last few months have been challenging but, thanks to our hard work and determination, we were able to find ways to engage with each other.’

‘I couldn’t be happier with this committee and winning this award justifies how much we have worked to be where we are today, said Lawrence.

Maurice Walsh, LYS’ Youth Work Manager, congratulated the young people on their deserved success saying, ‘there is a real get up and do attitude with young people in Limerick and it’s fantastic to see them being honoured.’

Maurice congratulated all the recipients of this year’s Garda Youth Awards and wished them the very best in the future.

The Limerick Garda Youth Awards acknowledge and celebrate outstanding young people (13-21yrs) who have faced and overcome personal challenges in their lives and have contributed to their community.

A member of Youth Work Ireland and the Irish Association of Community Training Organisations, LYS remains committed to connecting with young people and supporting them to reach their full potential.