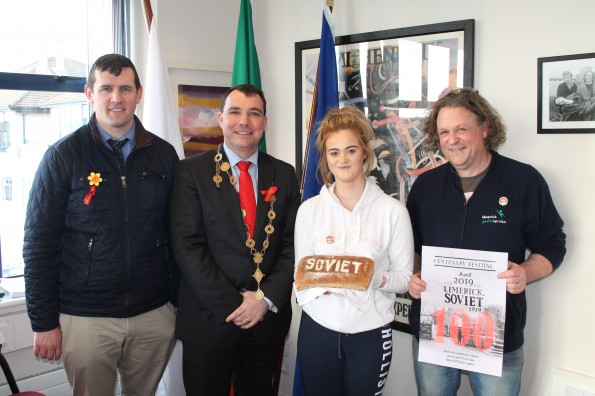 (from left) Frankie Daly, LYS with Mayor James Collins, Liz Byrnes & Paul O’Brien at the launch of the Limerick Soviet

Trainees with Limerick Youth Service’s Bakery Skills Course are playing their part in the centenary commemorations of the Limerick Soviet.

The trainees, who are based at LYS’ Community Training Centre, have been working with artist Ann Ryan on the Limerick Soviet bread project, part of an art history project called Continue in their Refusal.

In April 1919, the Limerick Trades and Labour Council organised a general strike in protest at the British Army’s declaration of a ‘Special Military Area’ as it imposed martial law during the Irish War of Independence.

As factories and shops closed in protest at the British decision to implement martial law, the workers declared a Limerick Soviet, an event that drew international media attention at the time.

‘For a fortnight, the Limerick Soviet ran the city as it printed its own currency, formed its own police force and organised a supply of food,’ explained artist Ann Ryan,

‘For the past year the young people have been learning about many aspects of the Soviet, particularly the role the local bakeries played during it,’ said Ann, a graduate of Limerick School of Art & Design.

As young bakers it was this part of the story that struck a chord with the class and they decided to create a special ‘Soviet Loaf’ to mark the centenary.

For the past few weeks it’s been all hands on deck with the young people baking the special batch which is based on a receipt similar to that used a century ago.

‘The bread during the Soviet was created using grain from a Canadian ship that was docked at Limerick Port,’ said Paul O’Brien, LYS Bakery Instructor.

‘From using this Canadian grain the bread was quite dense and heavy and our Soviet bread is similar to that,’ said Paul.

The Soviet Bread is available at LYS’ Community Training Centre, Lr. Glentworth St, Limerick while it will also waiting for patrons on the opening night of Bread Not Profits, a play on the Limerick Soviet which starts at the Cleeves Factory, O’Callaghan Strand on Wednesday, April 17th.

‘In another exciting development, you can also purchase your loaf of Soviet Bread with a Soviet Shilling, which can be purchased at SIPTU’s office, Church St, Limerick,’ said Ann.

Supported by the Limerick & Clare Education & Training Board, the Bakery Skills Course is a FDQ accredited course delivered at LYS’ Community Training Centre.