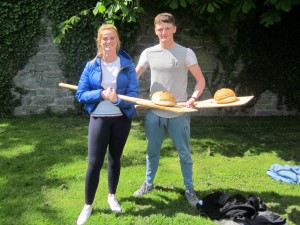 Liz Byrnes and Mícheál Hilliard, trainees with Limerick Youth Service’s Bakery Project, were crowned Limerick’s new ‘Lob the Cob’ champions at the regional finals held at the People’s Park, Limerick this past week.

In a highly competitive tournament, Liz’s throw of 13.3 metres proved the winner in the female category with Mcheál’s throw of 23m winning the gold medal in the male event.

New Limerick champions Liz and Mcheál will represent Limerick at the ‘Lob the Cob’ International Championships at the Alliance of Bakery Students and Trainees (ABST) Annual Conference in England this June.

‘Lob the Cob, which is popular in the baking industry, involves lobbing a 400g bread cob over your head using a baker’s peel -which resembles a wooden shovel!’ explained LYS’ Paul O’Brien,

‘A person gets three attempts with the winner the person who lobs the cob the furthest,’ said Paul, Baking Instructor at LYS’ Community Training Centre.

LYSwishes to congratulate Liz and Mcheál on their success and wish the Bakery Team the very best of luck on their trip to England.

A member of Youth Work Ireland, LYS remains committed to connecting with young people and supporting them to reach their potential.