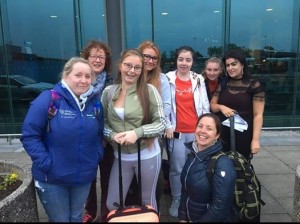 A trip to the Bluecoat Arts Centre, a tour of Anfield and a little bit of shopping were all ticked off the diary by young people with Limerick Youth Service (LYS) who were on a recent trip to Liverpool.

The girls, who are members of LYS’ D’Islanders Youth Group, also met Emma Smith, Liverpool Irish Festival who visited the the young people while in Limerick. 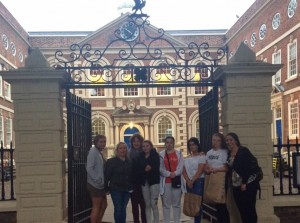 At the Bluecoat Theatre, Liverpool.

In Liverpool the girls visited the famous Bluecoat Theatre, one of the oldest performing arts centres in the United Kingdom.

‘The Bluecoat Theatre is celebrating its 300th anniversary, so for our girls to be invited was a great honour,’ said Gillian, youth work with D’Islanders Youth Group.

While at the Bluecoat Theatre the girls saw the rehearsals of Indebted: The Mix Tape, the latest production by the drama group, 20 Stories High,

Away from the arts centre the young people experienced a theatre of another kind as they paid a visited to Anfield, home of the legendary Liverpool FC.

‘As part of the tour we sat in the dugouts, visited the dressing rooms and the club’s trophy room-which is overflowing with five European Cups and eighteen League Championships! ’ laughed Gillian

Reflecting on the trip Gillian was full of praise for the five young people who raised the funds for their Merseyside adventure by holding a table quiz at Nellie’s Corner and bagpacking at Dunne’s Stores.

‘The girls deserve great credit as they worked hard to make this trip possible and they enjoyed every minute of it,’ said a very proud Gillian.

For some (of the girls) it was their first time out of Ireland and it certainly opened their eyes with one girl writing a diary of the event (see below),’ said Gillian.

One summer’s night we got up with the sunrise (4am) and headed to our youth space in Nicholas St where we all boarded a mini cab for Shannon.  Next stop Liverpool!

On arriving in Liverpool we went the Blue Coat Theatre where we spent time with other groups, got a tour of the building and saw the 20 Stories High group rehearse their latest play Indebted: The Mix Tape.

They had two weeks to get ready for the premiere and it was really cool to see them rehearse- even if they did forget their lines! 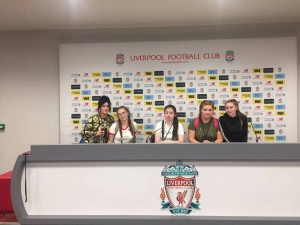 The next day we went shopping in Liverpool and found Primark- their version of Pennys.  Despite the name change they just couldn’t hide it from us! 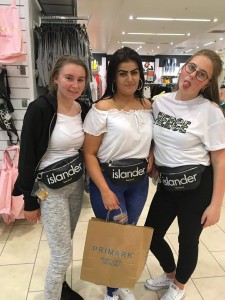 After our shopping spree we went to Anfield home of Liverpool FC- WOW!  What a stadium!  We saw the changing rooms, pitch and the trophy cabinet which was full- though the Man Utd fans with our group said there were more trophies in theirs!We had a really good time in Liverpool and can’t wait to return.

LYS would like to congratulate D’Islanders Youth Group who stepped on to the stage at the Belltable and stepped off in Liverpool.  Here’s to the sequel!

D’Islanders Youth Group is based at Nicholas St Youth Space, King’s Island and is open to young people from across the local community.

A member of Youth Work Ireland LYS remains committed to connecting with young people and supporting them to reach their full potential.