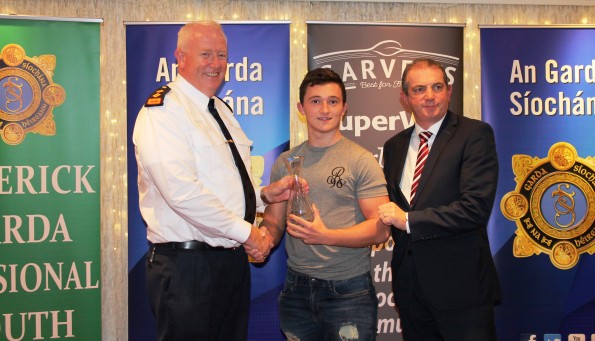 Above: Craig was presented with his Garda Youth Award by Chief Superintendent Gerard Roche (left( and Kevin McCarthy, Garvey Group who sponsor the awards.

Craig O’Brien, a volunteer with St. Patrick’s Youth Club and a Munster representative on the British Irish Parliamentary Assembly, was honoured at the recent Garda Youth Awards at the Woodlands Hotel, Adare, Co. Limerick.

A first year student in Limerick Institute of Technology where he is studying Community Development, Craig (20) was recognised for his involvement with Limerick Youth Service (LYS) which started when he was 15.

‘Craig started going to St. Patrick’s Youth Club and loved it so much that when he turned 18 he stayed on as a volunteer and mentor,’ said Mary Duhig, LYS.

St. Patrick’s Youth Club is based in the Dublin Road area of Limerick City and has young people from diverse backgrounds.

‘As a multi-cultural youth club Craig has been instrumental in running inclusion programmes and activities through games and sport,’ said Mary, LYS’ Clubs & Programmes Coordinator. 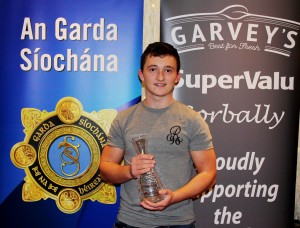 Away from the youth club Craig is one of Youth Work Ireland’s representatives on the British Irish Parliamentary Assembly (youth wing), a group that promotes co-operation between the United Kingdom and Ireland.

The group meet regularly to share experiences and information as well as discussing future policy particularly in the post-Brexit era.

‘With studying, youth work and his international role, Craig is a busy person but always finds time for the young people in his community,’ said Mary adding proudly ‘he thoroughly deserves his recognition.’

Craig was presented with his Garda Youth Award by Chief Superintendent Gerard Roche and Kevin McCarthy, Garvey Group who sponsor the awards.

LYS wished to congratulate Craig and the other recipients of this year’s Garda Youth Awards.

St. Patrick’s Youth Club is one of over thirty volunteer led youth clubs that are affliated with LYS.