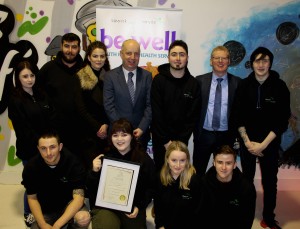 Minister for Mental Health, Jim Daly TD was at Limerick Youth Service this past week where he presented members of the youth organisation with an Investing in Children Membership Award and launched a video called ‘What is Counselling?’

Minister Daly was welcomed to LYS by CEO Fiona O’Grady and members of LYS’ Be Well Mental Health Youth Advisory Panel with its Chairperson, Cian Guerin, sharing some examples of their work with the Minister.

Cian told the Minister that ‘one of our messages is to bring down the stigma and stereotypes of mental health and encourage young people to be more aware of it.’

After hearing from a number of guests speakers Minister Daly presented members of the Youth Advisory Panel with the Investing in Children Membership Award which acknowledges the role LYS has played in advocating for and supporting youth mental health.

The Investing in Children Membership Award gives national recognition for good practice and active inclusion of young people in dialogue and change with the Be Well team worthy recipients.

Minister Daly and all in attendance were then introduced to ‘What is Counselling?’ a superb short film that aims to make young people feel more comfortable asking for and attending counselling (see below).

Created by young people with the Be Well team, the film draws on the experiences of young people who have attended counselling and challenges the stereotypes often associated with it, a fact alluded to by Minister Daly.

‘You have tapped into it cleverly with a short video that is so real and brings home to all of us that terrible fear and stereotype of counselling that some may have,’ said Minister Daly.

Minister Daly commended the Youth Advisory Panel for creating a video ‘that is so real, so humane’ adding ‘I am genuinely so impressed that I will do my bit to get this video to as many people as I can.’

The Minster thanked the young people at LYS for the warm welcome and sharing with him their experiences saying he was ‘blown away by the presentations. ’ 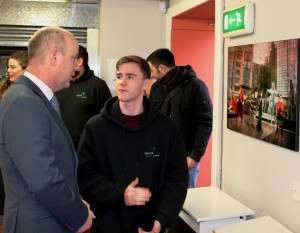 LYS wishes to congratulate the Be Well team for producing a much needed and thought provoking video, with a special word of thanks to Minister Daly and all for attending the launch.

The Youth Advisory Panel is part of the LYS’ Be Well Mental Health team which is supported by the Health Service Executive.

A member of Youth Work Ireland, LYS is the largest youth organisation in Ireland and remains committed to connecting with young people and supporting them to reach their full potential.