There were joyous scenes in West Limerick on Friday last, as Askeaton-Ballysteen Youth Club opened its doors for the first time in two years. 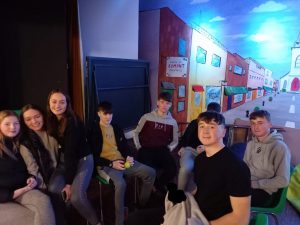 Catching up with each other at Askeaton Youth Club

Although the youth club has been active online and held several events in that time, the return to its regular Friday night slot at Askeaton Community Centre was welcomed by all.

‘The atmosphere was contagious and it was nice for the young people to meet up again at the youth club,’ said Tommy Hartigan, Askeaton-Ballysteen Youth Club.

‘With the queues outside and the sense of excitement in the air, it was like the good old days with the young people playing pool and catching up with each other,’ said Tommy, volunteer with Askeaton-Ballysteen Youth Club.

The excitement was not just confined to the young people with the volunteers also basking in the reopening of the youth club.

‘Many of the volunteers were as excited as the teenagers when they met on Friday night, laughed Tommy adding ‘it was all hands on deck to prepare for the night.’

Tommy paid tribute to the young people and volunteers for their support over the past two years and for their commitment and passion to ensure the safe reopening of the youth club.

‘after a challenging two years for young people, it was great to see them all back in the youth club on a Friday night’ 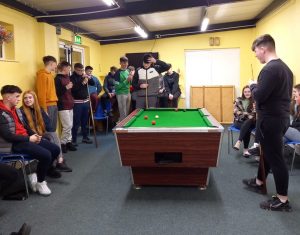 Enjoying a game of pool at Askeaton-Ballysteen Youth Club

‘After a challenging two years for young people, it was great to see them all back in the youth club on a Friday night,’ said Maurice.

‘Volunteer led youth clubs are a key part of the local community and play a major role in community coherence, particularly in rural and isolated areas,’ said Maurice adding ‘we are looking forward to supporting other youth clubs as they reopen.’

Those interested in reopening or establishing a youth club in their community or who wish to volunteer, can contact the Youth Information Office at yib@limerickyouthservice.com or call 061-412444/083-1726898.

Askeaton-Ballysteen Youth Club is located at the Community Centre, Askeaton and meet every Friday from 8-10pm with new members welcome.

A member of Youth Work Ireland and the Irish Association of Community Training Organisations, LYS remains committed to connecting with young people and supporting them to reach their full potential.