Ginger Minj, Blindboy Boatclub and Mr. Gay Ireland were among the many famous faces that launched this year’s Virtual Pride Youth Festival at Limerick Youth Service.

The three day festival, which was held online due to Covid-19, was one of the biggest in recent years and proved very popular with young people and their families taking part.

The celebrations started with a super launch party followed by a LGBT+ themed quiz, movie night, drag workshops, the crowning of the Pride Monarchs and an incredible virtual Pride Parade (see below)

‘With a variety of online activities the young people had plenty to choose from, so there was something there for everyone,’ said LYS’ Shelly Goggin, adding with a sigh of relief ‘it all went a technical hitch!’

Ahead of the festival, participants were sent Pride goodie bags that included popcorn, Rainbow flags, temporary Pride tattoos and lots of surprises that proved very useful for the quiz and movie nights!

‘allowing her to get to know her daughter even more’

‘Our LGBT+ quiz was great fun- one minute you were answering questions on LGBT history and the next you were running around your house looking for Pride memorabilia,’ said Shelly, youth worker with Lava Javas Youth Café.

One of the highlights of the festival was the virtual Pride Parade that included video clips from young people, youth organisations including Jigsaw Limerick and well known celebrities such as Richard Lynch, PRO, Limerick Pride.

‘It was an unbelievable few days and it meant a lot to LGBT+ young people, as it allowed them be themselves and celebrate who they are in their own home,’ said Shelly.

‘We had some young people join us whose parents were really supportive and joined them for the Parade Party, with one parent thanking us for allowing her to get to know her daughter even more,’ said Shelly.

‘some LGBT+ young people who hide their identity’

‘One of the important outcomes from Pride is that parents spoke with us about listening to and supporting their children who are LGBT+,’ said Shelly.

Shelly was keen to point out that ‘there are some LGBT+ young people who hide their identity, therefore the Pride Youth Festival was a great way for them to feel connected and respected in their community.’ 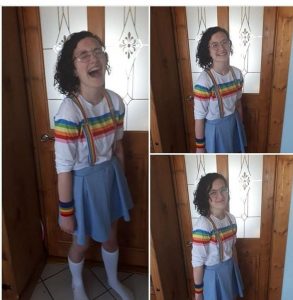 LYS would like to congratulate the young people, staff, guest speakers and workshops facilitators for all their support in organising this year’s Virtual Pride Youth Festival, with a special word of thanks for the young people and parents who took part.

One of the advantages of a virtual Pride is that you can relive the launch party, workshops and parade with the touch of a button! Click HERE for more (Via Instagram)

If you would like to learn more about LGBT+ youth work and support with LYS please contact olivia.chau@limerickyouthservice.org or call 061-412444.